Both companies have evolved over their existence, with each becoming more like the other. For instance, PayPal now offers card transaction tools to small businesses often not served by larger payment processors, while Block’s Cash App is much like PayPal’s original peer-to-peer money transfer platform. Each is also a “buy now, pay later” middleman.

From an investor’s viewpoint, though, one of these names has much more upside potential than the other. That’s PayPal, and here’s why.

2 reasons to bet on PayPal instead of Block

Don’t panic if you’re holding Block rather than PayPal. It’s certainly possible it could end up ahead should the tide finally turn in both companies’ favor. In the meantime, each is facing the risk of a full-blown recession, when buying and selling tend to slow.

For investors with a true long-term time frame, however, PayPal has the better risk/reward proposition for a couple of reasons.

PayPal is a longer-established company. Some investors will debate the merits of age, as younger companies are better suited to handle more-modern opportunities. Older outfits often may have a tougher time adapting (Polaroid, Blockbuster, and Toys R Us are a few examples).

There’s a flip side to this argument, however. Not all new opportunities are great ones. Meal kit company Blue Apron remains in the red largely because the fiscal math behind the business doesn’t always make sense. But enthusiasm was certainly sky-high when Blue Apron launched in 2012, like much of the enthusiasm intermittently surrounding Block since its inception.

That’s not to suggest Block is more like Blue Apron and less like PayPal. It would be naive, however, to ignore how Block made a huge bet on cryptocurrency Bitcoin back in 2017 when it rolled out the ability to buy and sell the digital currency to its app’s users. The company doubled down on its bet by outright buying $50 million worth of Bitcoin in 2020, then changing its name to Block (a nod to Bitcoin’s underlying blockchain coding) late last year. Since then, the future of Bitcoin has come into question, as the entire cryptocurrency ecosystem might be starting to implode.

Bitcoin is only one of Block’s profit centers, and it’s not a particularly big one. Given the sheer depth of the bet the company made on just one cryptocurrency, though, it might have fundamentally altered how it’s organized and how it operates to support the now-wobbly growth prospect.

PayPal is playing a cryptocurrency-based hand as well. But it’s not making the same narrowly focused bet, and certainly a smaller wager. PayPal now simply allows users to buy, sell, and transfer cryptos Bitcoin, Bitcoin Cash, Ethereum, and Litecoin, hedging its bet by offering access to four of the world’s most popular cryptocurrencies. Its core focus remains on more-traditional transactions using fiat currency.

The second reason PayPal shares are better positioned for a bigger recovery than Block is that PayPal’s more advanced age makes it much easier for the market to believe in it.

In some ways, this advantage manifests itself in the two companies’ differing results. PayPal’s net profit margins are consistently higher than Block’s, for instance, leading to more predictable results and fewer disappointments. PayPal is also sitting on significantly more cash. Specifically, it has more than $10 billion in cash or near-cash instruments and roughly another $40 billion in loans and receivables that can help address any near-term liquidity problems.

These nuances seem minor on the surface, but when liquidity ultimately means flexibility, they’re a big deal.

And PayPal’s seniority makes a difference in consumers’ perception of it. Most of the world has at least heard of it even if not everyone is a user, which is why it still enjoys a leading market share of the payment space. 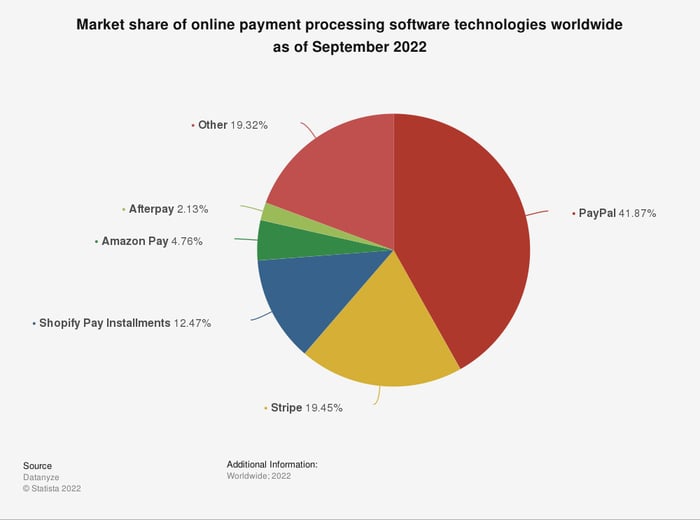 Block’s Cash App doesn’t even come close in terms of recognition or reach, even if it’s not necessarily going head-to-head with PayPal.

At the same time, although Block’s card-swiping reach is estimated to be on the order of 2 million merchants, much of that growth was achieved before PayPal stepped up its efforts to better serve small businesses. Indeed, PayPal only unveiled its all-in-one Zettle point-of-sale terminal in October, giving small businesses everything they need in one integrated system at a very affordable price. Look for this tech to put even more pressure on Block’s hold of the card-swiping market.

It’s ultimately all about perceptions from here

Both companies are likely to struggle under the weight of any economic weakness on the horizon; it could be a while before either stock soars. Conversely, both companies have proved they can grow their similar businesses. Each could soar again at some point in the future.

But because a five-bagger is going to be rooted in recovering what was lost and then continuing to build on previously established foundations, PayPal is the stronger play here. Block is still more of an unknown — a moving target in flux. PayPal shares won’t face the same degree of “show me first” doubts.