Bitcoin’s rare Wednesday sight of $18,000 fueled moderate excitement among market participants, but the momentum fell short of propelling a breakout from this range. The broader market returned to a predominantly red theme on Thursday following the depreciation of the midweek macro boost. The fleeting bounce has set the BTC price on a path that could see it register a daily close below $17,400. The majority of alts have, too, resumed a boring trading setup throughout the day and appear to be headed for a dull Friday served with a bit of chopping action. Polygon (MATIC), Solana (SOL), and Cardano (ADA) have all trailed Bitcoin in the correction. Here is a roundup of everything you have missed today and this week.

On the product integrations end, digital assets trading platform BitGo announced on Thursday support for AVAX institutional-grade staking from qualified custody. Last week, Avalanche’s Head of Engineering, Patrick O’Grady, posted news of the release of optimization upgrade Banff 4 with a release focus, including preparation of the nodes for cross-subnet messaging.

To learn more about Avalanche, visit our Investing in Avalanche guide.

It was expected that with a successful Merge execution, the mining sect of the ecosystem would be gravely affected by the network’s transition away from Proof-of-Work (PoW) mining. Months after the switch to Proof-of-Stake (PoS) consensus, some Ether miners are still struggling to remain in business in the post-Merge environment. Crypto intelligence and market data provider CoinMetric observed in the latest edition of the ‘State of the Network’ published on Dec 13 that a group of miners have resolved to exchange their previous mining machines (ASICs) for those powered to mine Bitcoin. The analytics and research platform noted that the repurposing of previously Ethereum-focused GPU mining hardware has been reflected in the network’s hash rate which has swelled in the current quarter.

Polygon has shown consistency in building and advancing its ecosystem amid the bear market cycle earning several accomplishments to its names. The flurry of positive news associated with these developments has barely saved MATIC, the native token of layer 2 scaling solution, from heavy erosion since the start of the year. In a Dec 14 blog centered around zero-knowledge proof, the Polygon team revealed an ongoing audit on its zkEVM solution that began at the start of the month. Still, the MATIC token faces an uphill task reclaiming early November price levels especially if the market lingers in the current market sentiment.

The Hong Kong stock market welcomes its first exchange-traded funds (ETFs) tracking Bitcoin futures contracts from CSOP Asset Management to be listed on Friday. The debut involving two products, CSOP Bitcoin Futures ETF amd ProShares Bitcoin Strategy ETF, mark the introduction of Asia’s first crypto-backed exchange-traded funds. The ETFs have raised as much as $73.6 million and will  reportedly mirror the performance of futures traded on the Chicago Mercantile Exchange according to a Reuters report. Meanwhile, the developing legal battle between Grayscale and the US Securities and Exchange Commission has hurt the asset manager’s Bitcoin Trust (GBTC) fund.

The discount to net asset value of the fund, which is also the product of interest in the contention with the financial markets regulator, reached record levels after pushing past 50% yesterday. Though the figure has slightly contracted, the concerns around the reserves of its parent firm Digital Currency Group which has a significant stake in troubled broker Genesis, and higher fees thwart immediate positive action. The SEC’s unwavering stance in disapproving the conversion of the flagship (and the world’s largest Bitcoin) fund mounts even more pressure on hurts GBTC which has been trading adrift from its underlying asset this year.

Ark Investment’s funds on Dec 14 executed a purchase of 296,578 COIN shares in Coinbase exchange company across three of its ETFs as per the daily trade information newsletter. Its premier ARK Innovation fund (ARKK) accounted for the bulk with 176,364 shares, while a proportion of 93,117 COIN was assigned to the ARK Fintech Innovation ETF fund (ARKF). The Next Generation Internet ETF (ARKW) fund got a scoop of the 27,097 Coinbase shares. 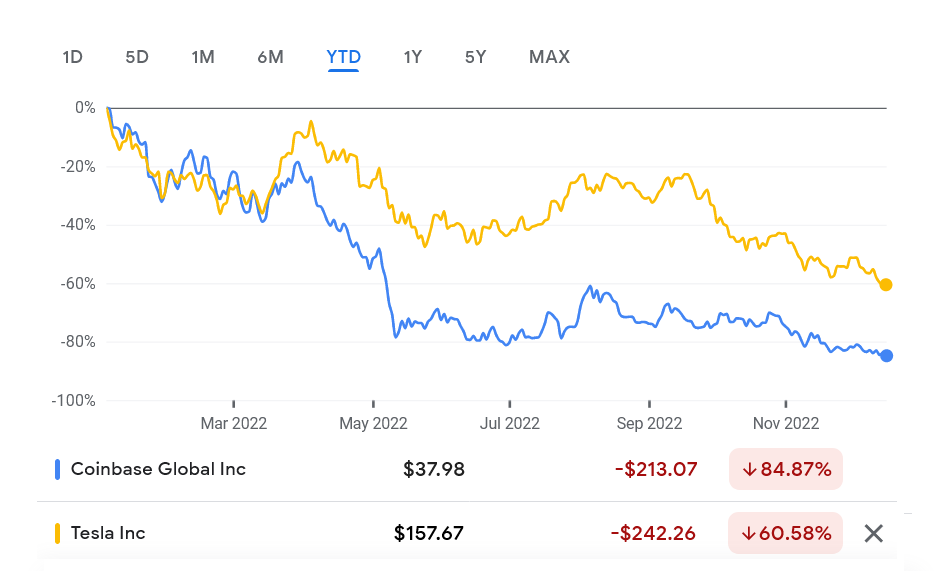 The innovation-focused investment firm also completed a similar snap up of 74,862 Tesla shares as the value of the stock of the energy and EV maker extended a downtrend reaching a two-year low. The latter was also executed across three of the firm’s exchange-traded funds: – 10,066 for the ARK Autonomous Tech. & Robotics ETF (ARKQ), 61,537 shares for ARKK and 3,259 for the Web2 tech-themed ARKW. The move followed Musk’s sale of approximately 21,995,000 shares of the company valued at $3.6 billion, according to the filed regulatory filing.